Here’s the long-awaited Negima movie! I’ve been looking forward to working on this since the day it was announced. The movie is an alternative ending to the manga, which will be ending soon.

On that note, it has been subbed with original Latin phrases (this means all spell names are left untouched). We assume the majority of people who will watch (and enjoy) the movie are fans of the manga, and have read it enough to know what certain spells do (a lot of them don’t make sense, anyway). If you’re still confused, we recommend using Google, or checking a Negima! wiki for further information.

Adding on, roughly 15 signs were typeset for the DVD. There’s no point in going all-out, as SHAFT may decide to SHAFT the blu-ray and make life harder for me. The 15 or so signs were the most important of the movie, but when the blu-ray is released, all 180+ signs will be typeset.

Thanks to everyone who helped with the Latin!

…and I took on the roles of timing, typesetting, and editing.

We hope you all enjoy the release, and we look forward to seeing you again for the blu-ray!

There aren’t many changes in this half of the batch. Just some minor stuff, yada yada. I’ve blogged enough about Gosick already so I’ll keep this short and sweet~ Victorique looks so cute in this art I grabbed from Danbooru.

Extract the contents of the rar to the same directory as episode 13-24, run the batch file, it will create files with the tag (Batch) in their filename, you can delete the originals after this. I didn’t add a delete function just to be safe because it’s 12 episodes. Also there’s nothing stopping the people who dont like (Batch) in their filenames from simply just renaming the files or changing it to v2/v3/etc. I did this for ease of the patchers.

La fin~ and so that wraps up the 6 month run of the Gosick anime. I’d be lying if i said I didn’t enjoy working on this series, because I quite enjoyed working on it. It was neither about Japanese school kids, nor about Japan itself in general. The setting and the location were both breathes of fresh air to me, and there’s something about the whole “ye olde days” that sparks interest and keeps the flame burning strong. Now it’s pretty clear that they skipped a LOT and I do mean a LOT of details throughout the course of the series, and while that may be so, I felt they did a wonderful job of developing the characters and condensing ~4-5000pgs of material (13 novels @ ~3-400pg each) into the space of 24 ~21min episodes. I’m actually surprised they pulled it off as good as they did, and while it might have not been a perfect execution, I still felt it was exceptional and worthy of praise.

That’s enough finale blogging for me. I hope you guys enjoy the end of the final arc of the series (for those who haven’t already watched in anxiousness!)

The Victorique project consisted of myself, Raze and fnord basically, and the name will be put to rest with the last release of the Gosick Blu-rays (so it’ll be a while still lol~). And so with that, it’s time to roll the credits and close the curtains.

ar (Encoder/Timer/Titlesetter/OP Kara): I’ve already blogged all that I wanted to blog about, so tl;dr it was fun and I had plenty of time to slowpoke and re-encode stuff until I was happy with it. Also I probably spent more time editing/matching fonts/making templates/doing the logo than actual combined time typesetting the majority of the episodes (lol~).

Raze (TLC/Editor/QC): I got pulled into this side project when we figured that I might as well QC the CR scripts for this show since I was going to follow the series anyway. I guess this was a decent show. It did sometimes feel like Victorique was pulling solutions to the mysteries out of nowhere though, especially with the earlier arcs. Gosick was a huge chore to work on some weeks and a breeze on others, because the quality of the CR scripts varied greatly across episodes (random translation/grammar/diction errors here and there, and general awkward, unnatural phrasing). Still, it’s quite something to realize a project you’ve been working on for half a year has just ended. Hopefully you enjoyed our offering of Gosick!

fnord (OP & ED Translator/ED Kara): I was somewhat disappointed with Gosick’s mysteries when the show started, but it improved a great deal from there. All in all, it was a nice enough show, and I adore the first ED. I hope you liked Gosick as well.

So I remember the equivalent scene in the light novel being really sinister and full of despair, but in the anime they gave Vlad this hurrdurr retarded laugh and randomly changed the plot for no particular reason. Oh well, I guess there’s bound to be some of you out there who’ll enjoy this episode.

Either way, this marks the end of the Hidan no Aria TV project! The UTW staff were never really very motivated to work on this show, though (with the exception of commander`A); this is probably somewhat reflected in the curtain call comments below.

Raze (Translator/Editor/Last Resort Timer/QC): Yeah, I practically handled the script alone, especially towards the end. I did somewhat enjoy the light novel (although by the time I reached around volume 5 continuing it just wasn’t very high on my priority list), but I’m not sure I can say the same about the anime. At any rate, I hope you enjoyed my work!
commander`A (Timer ep1-6, 8, 11-12/Encoder ep1-6): Truely a spectacular series. I will do the BDs as well!
fnord (Typesetter): I strongly disliked working on Hidan no Aria and can only hope the people who watched it derived some sort of enjoyment from it. I most certainly didn’t.
Daiz (Encoder ep7-12): I actually watched a single episode of this series at one point. I will never get those 24 minutes of my life back. Episodes 11 and 12 gave me a nice chance to test out my new computer, though.
ar did the karaoke timing/styling, Kusion and Nikon both timed an episode each, and Moshiburner helped QC the first three or four episodes until he decided the show wasn’t worth his time anymore.

Oh, and commander`A really wanted to do the post for this last episode but I didn’t let him. Being the nice guy I am though, I’ve appended his very long (and, according to Kusion, pretty good) rant about why Hidan no Aria is the best show of 2011:

[spoiler]I still cannot believe that this is the finale of this awesome series… It’s also sad how people are saying that this animu sucked. Well, FYI, this was the BEST animu of 2011. Even the staff working on this series were lazy and mean. I mean, they kept saying harsh things about Aria-chan all the day. Like seriously, most of them did that just to troll loyal fans of Aria-chan, like me. Really. Unbelievable, isn’t it? Well, that’s life… I, for one, did my best to fight back for the sake of our great and beloved Aria-chama. I’ve been doing it from the past 2 months and I am willing to do it as long as there’s a shred of life left in this empty body of mine… And even after I die, I will keep haunting everyone who said mean things about Aria-tan and fight them till death. And I hope everyone who liked this animu has same passionate feelings towards Aria-pyon.

I actually missed working on episode 7 and 9… I still regret missing those episodes as no one in this group handles Aria-chan with care. They just did those episodes half-assedly and released them without any respect. I had horrible nightmares on those two nights. I’m sorry Aria-chan, I will make up for it when I do the BDs… I promise! Anyway, let’s stick to the topic. This week’s Aria was a double episode marathon, I know it must’ve been hard for all of you to wait for a week without Aria, I mean, waiting for a week itself was so hard… and then we had to wait for another week, which means there was no Aria for almost 14 days! But alas, everything came back on track when I saw two episodes back to back. I felt so relieved after having my dose of Aria-chan after a decade of waiting. Life is harsh. As Jean-Jacques Rousseau said once: “Patience is bitter, but its fruit is sweet!” I totally agree with him/her/it. The happiness of seeing Aria-chan in front of me was like, the feeling you have while having an intercourse with your opposite gender. No, actually, it was BETTER than that. I didn’t sleep last night as I had some work to do, but I cannot define how happy I was when I was given the script to time and heard Aria-chan for the first time in WEEKS! OH, MY, GOODNESS, that was insane. I forgot how tired I was… I was literally jumping up and down in excitement… I didn’t know what to do. I couldn’t restrain myself from crying. That warm and seductive voice of Aria-chan, that feeling of meeting your loved one after a long time… that was simply amazing. I think I should stop now or I’ll say things that I don’t want to. Happy fapping to Aria-chan.[/spoiler]

I guess this isn’t really the end yet, since commander`A will be doing the BDs, and there’s one more episode to come on DVD apparently.

Enjoy and keep flying with us! I’ll make a formal announcement of our Summer 2011 plans sometime in the next few days.

P.S. from commander`A: We are going to be celebrating the brilliant ending of this series on Skype tonight. If you want to join us then add me (troll4ever_89) on Skype and I’ll add you in the group call! 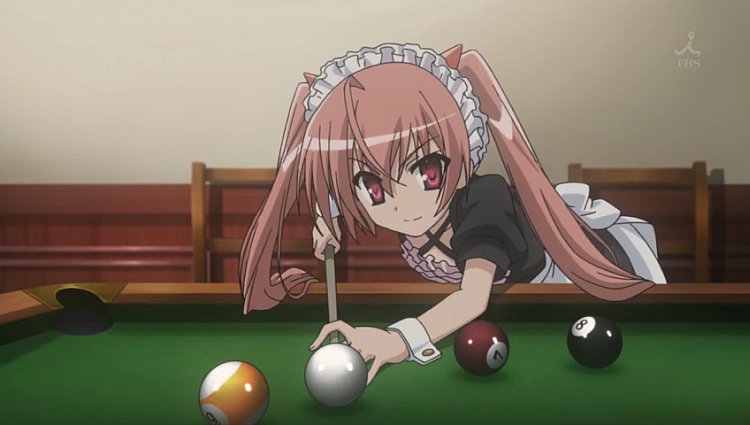 Lots of Aria in a maid uniform in this episode. Riko continues to do what she does best: troll everyone around her.

Episode 12 will be out before I go to bed tonight (sometime in the next 6 hours). Enjoy this episode for now.

In the year 1925… Germany invaded Poland and triggered what would be known as the second World War, or so the story goes. In this universe, it seems like WW2 begins in the mid-20s. I guess we don’t get a timeskip after all ;<

The Christmas of 1924 (between 22 & 23) brought many a gift for all; Kujo got the gift of a haircut, Victorique a chess set, the Marquis de Blois a memento box, Cordelia some pyrotechnics and Roscoe (non-evil one) a pair of black matching pistols (see note at bottom)

That’s enough blogging for me. The delay this week was brought to you by subbing the Ano Hana finale and Raze being employed and overworked (so he claims~). Enjoy this weeks episode, only a few more days till the finale.

Also, with a double-aria this week it may affect Gosick’s release timeframe, but we’ll see what happens and how much work the script needs/etc. We’ll do our best, k~

Pistol note: The pistols Roscoe draws appear to be Mauser C96’s from afar, though on the close-up they have removable mags which the C96 didn’t get until the 1930’s, and look more like modern sub-machine guns than their early 20th century counterparts. I guess considering the timeline for the second world war, historical firearm accuracy would be the least of their worries (lol).

NB: Ano Hana Batch will be done when it’s done.

There’s lots of work to do on it, so when we’ve got the time we’ll get it all done and till then you wait patiently (even if you don’t it won’t make it any faster. Hell, we might even delay it more~).